As the title implies, the book will be structured as a fictitious oral history, culling blurbs from invented interviews and articles together into a narrative. 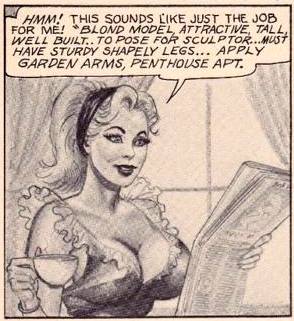 I saw the ads for their amateur night in July and thought “Why not? It might be fun.” And I ended up winning, and so they asked me back, not knowing about my past.

Which is… when I was at Penn State in the 80s, I did nude modeling and then a bunch of hardcore shoots. Senior year of my undergrad, and then a few years later when I was in grad school. Early 80s, then again in the late 80s, early 90s. About five years total.

I wouldn’t say “star.” Most of the magazines I was in were pretty small, under the counter, back room of the newsstand magazines. Sold mainly at adult bookstores, you know? The movies were just super 8 loops sold via mail order, and the videos were shown on a few regional pay cable systems. Nothing was ever released on VHS or DVD or anything. It was mainly just a way to help pay the rent while I was in school.

You mean dance or strip?

Two times. Once for a feature night that one of the magazines I’d appeared in hosted, and the other, a model I’d worked with was stripping in a booth at an adult bookstore off one of the exits of I-80, and she coaxed me into the booth with her. The owner of the place kicked me out.

Getting to college and feeling free to experiment and try things I’d never tried before.

Probably a combination of physicality and repression. Part of it was the Catholic schoolgirl cliche. I went to Catholic school till sixth grade.
But really, like I said, mainly it was that once I got out of high school and away from home, I suddenly felt free to explore all these things I’d always been curious about, sex among them. My major was fitness, kinesiology, so academically I was exploring the body and how it worked. And I took a couple human sexuality classes, which, again, sounds like a cliche, but it made me feel like that was a part of who I was.
Also, I went through a punk phase for a couple years and that whole culture encouraged nonconformity. That was big. It made me unafraid to be outrageous.

My senior year, there was a local photographer looking for models for a college girls magazine and a friend of mine and I posed on a mutual dare… kind of “I’ll do it if you do it.”

Oh, no. No. The first few shoots, they were just nude shoots. Just me and the camera. But after the third or fourth solo shoot, a second photographer asked me if I was interested in “doing something more,” his exact words, and I knew what that was code for. It was something I had already thought about– having just a sexual relationship with someone, no strings attached– and here someone was asking me if I wanted to do it in front of a camera and get paid. It really didn’t seem like that much of a stretch. So I said “Yes.”

Of course not, but the one photographer I worked for wanted to try to capture real sex on film. Instead of posing us, he’d have three cameras going– one still camera and two movie camera– and he just told us to go at it and he shot while we screwed. And then he’d take the movie footage and go through and enlarge the good frames. He didn’t want the posed look that most magazines were doing back then. Which, I didn’t realize at the time, could have been trouble for him.

There were still pretty strict anti-obscenity laws on the books back then. There still are now, too, except they’re not really enforced, prosecuted. But… you’re not old enough to remember, but in the 70s, up until the mid 70s, a lot of adult magazines wouldn’t show female genitals, and in sex shoots, it was always posed, never penetration. Right? So if you think like a prosecutor… posed shots, you could argue, were just the work of a model. Even an X rated movie with hardcore sex sequences in it, you could say that it was acting, art, whatever. Right? But what we did, which is shooting real sex and getting paid for it… which to a prosecutor, you could argue, was getting paid to have sex… so if they wanted to, they could bust you for…

Yep. That’s how it could have been trouble… for him AND for me, although I was so naive the whole time I was doing it… I didn’t figure any of this out till years later. It’s probably a good thing, too.

Well, wait: the first time I saw one of the magazines at a newsstand, I really wished I hadn’t done it. I mean, I’m standing there getting a newspaper and a copy of “Rolling Stone” and I glance at the adult rack and there’s my face, peeking out on a cover of “Coed” from behind a modesty shield. I kind of freaked out about that.

But then I realized, well, the pictures are out there. No putting the genie back in the bottle now. And actually once I calmed down, that kind of emboldened me to keep doing it.

But in the moment I saw that magazine back there, I felt so scared I was almost physically sick. I thought “What if Dad or Coach Paterno find out?” Because my dad was a pretty prominent politician back then, and I was a trainer in the athletic department, including for the Penn State football team, and I couldn’t imagine anything worse than either of them finding out. There could have been serious, serious problems for Dad if I’d been found out. Like: scandal problems.

Not to mention my brothers! I have five brothers. I mean, the first I’d ever seen magazines like those was because they had them in their treehouse. That made me feel skeevy: the possibility that they might have bought one of those magazines and opened it up and seen their sister getting screwed.

But none of them ever found out, or if they did, they never mentioned it to me. (laughs) Thank God!

First time around, no, because like I said, in 1981, 1982 no one knew about AIDS yet. By 1987, when I came back, things were really different and the photographer I worked with insisted that everyone was clean and tested. Period. Either you passed a blood test or you wore a rubber.

No, not that I’m aware of. My whole career was totally pre-digital. The early hardcore stuff, that was still on film: super 8 movies, what they call “loops.” And when I did videos later, those were just aired on a handful of pay cable systems. A few in upstate New York, another few out west, a couple in suburban Philly. And when I quit the business for good, I had a chunk of money and I bought the masters to them, and I haven’t done anything with them except share them with my husband and in a fan group I have on Facebook. So if any of that stuff is out there online, it’s because people transferred the films or scanned the pics or taped them off the tube back then. (laughs) Or copied them off my Facebook page.

Because I’m a woman and I did what I wanted to for my own reasons, and I’m doing what I want now, and I never think, “Well, I’m a woman. Should a woman do this? A woman shouldn’t do this.” Being a woman is never a reason for me to either do or not do anything. Simple.

It’s not that it’s “fake” so much as exaggerated, you know? I’m not an actor but I totally get what an actor does: perform as much for the benefit of an audience as for yourself. The photographer I worked with said he wanted to capture real sex on film, but I think that would’ve been impossible. In real sex, you’re not thinking both about how it feels AND how it looks. (laughs) Unless you’re really vain. I mean, I’ve been with guys who have the mirrors by the bed… on the ceiling…

Fun. A lot of fun. I mean, I’m doing it again in December, and that’s because I had fun doing it in October, you know?

The surprising thing was, like I said, what I did had such a limited audience– I thought– and yet there were people coming up to me and going “I used to have your magazines, I remember your videos, I used to have such a crush on you.” That totally surprised me, that people remembered me 20 years later. It was sweet. I know people think it’s a nasty business and all that, but I don’t think that goes for every aspect of it, and when people said that, I really felt… loved. You know? Loved. It was really great. You can’t say that about many things, that they make you feel loved 20 years after you did them.