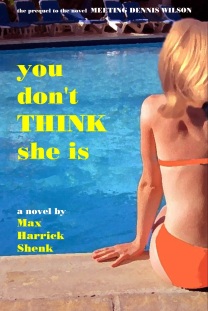 Summer 1972, Quaker Valley, Pennsylvania. Our narrator, Brian Pressley, has to find a friend to fill in while his best friend, Margo LeDoux, is on vacation in Canada for two weeks. There’s always Marty Morone, of course, but…

…When sixth grade ended and it was time for Margo and her family to travel north for their annual summer vacation (at her Grandma LeDoux’s cottage on Lake Opinicon in Ontario), I was ready in two ways. The first was that Mom and Dad had signed me up for Archaeology camp: two weeks at an actual working dig at Camp Sequanota, a Lutheran camp in the western part of the state. That started the second Sunday that Margo was gone. But even that first week wouldn’t be a wash: I had Marty to do stuff with. I didn’t know what that “stuff” would be, but the day before Margo left, she asked me what, if anything, I’d be doing while she was in Canada, and I said “Go to the pool. Remember?”

“Oh, yeah, that’s right.” The silence on the phone told me that she’d spotted a hole in my plan. I could almost picture her standing in their kitchen, biting her lower lip.

In fact, if I stood at the kitchen window, I could see her standing there, leaning against their counter.

“Does he have a card?” she said after a couple seconds.

“I don’t know,” I said. Come to think of it, I’d never seen Marty or any of his brothers or his parents at the pool. “Well,” I said, “we’ll think of something.”

Fifteen minutes after we hung up, Margo was knocking at the back door. 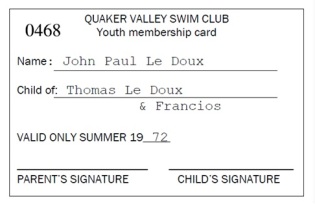 “What’s this?” I said as I examined it, awaiting Margo’s “Doyeeeee” as soon as the words left my lips, because I could see plainly what it was.

“What’s it look like?” Margo said. “You said you and Marty wanted to go to the pool, right?”

Margo tsked. “Just give it to Marty. Mom says he can have it. Jompaw never uses it. He hates swimming in pools.”

I looked at the card again. There was no signature on it, but still…

‑‑Another TSK! and sigh! “Brian, Mom wouldn’t give it to you if it wasn’t O.K.” She closed my fingers around it. “All right?”

It was all right with me.

Margo left early Monday, and I didn’t waste any time: right after breakfast I called Marty and asked him if he wanted to bike out to the pool with me after lunch. I guess he just figured that I had a guest card, but when we parked our bikes in the bike rack out in the pool parking lot and I handed him Jompaw’s card, he nearly had an aneurysm.

“‑‑Marty…” I lowered my voice. Maybe Marty wanted everyone at the swim club to know that it wasn’t his card, but, silly me, I still sort of figured we could pull this off. “Margo’s Mom said it’s O.K,” I repeated quietly. “Don’t say anything, you know? Just… hand it to them at the desk and sign his name‑‑”

Marty thought about this for a second.

“All right,” he said, and we walked to the front desk.

I don’t know what Marty meant by All right; I just figured he meant Fine. I’m in. Cool.

We stepped up to the desk and gave the girl our cards and signed in, and I thought that was it…

…but from the moment we walked away from the desk, Marty was fretting, looking over his shoulder.

Then, a few steps later:

And that was just the beginning:

“Brian, what if someone calls me Marty?”

“Brian, the lifeguard keeps looking at me.”

“Be sure you call me John-Paul if we go up to get something to eat, Bri.”

“You think they’ll call Margo’s mom and ask her about this… you know, is your son home?”

Is your son home?

“There won’t be anyone home,” I said.

Marty got the puke-on-the-desk look on his face again.

“So they’ll know that John-Paul’s on vacation,” he said.

It was clear to me, after just 35 minutes of this, that John-Paul Martin Morone LeDoux simply could not relax and go along with the game and splash in the pool or sit in the sun, and before the first adult swim (2:00 pm) we were back on our bikes, riding home. There it was, midday, blazing hot ‑‑prime pool weather‑‑ and we were riding away.

On the first day of three Margo-less weeks.

It looked like it was going to be a long summer.

You Don’t Think She Is by Max Harrick Shenk 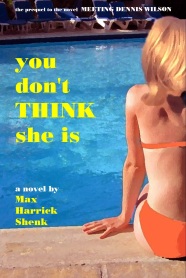 Available in print and Kindle editions. Click here to order.