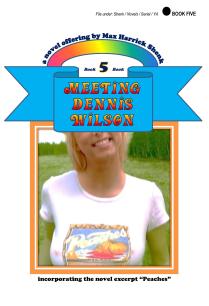 “Waiting for someone, Mr. Pressley?”

I heard the words at the same time that I felt the heavy hand on my shoulder. Dick Smiley, one of the assistant principals: tall, thin, sunken eyes, black hair, combover, narrow black necktie from the Ralph Nader Collection at your Adams County Goodwill. If Mr. Drake, the principal, looked like Sgt. Schultz from Hogan’s Heroes (“You’re right! He does. I wish General Burkholder would send him to the Russian Front!”), then Dick Smiley looked like Colonel Klink (without the monocle), or maybe even Adolf Eichmann. Someone who was less concerned with learning or teaching than he was with discipline: the cold, efficient operation of a system. 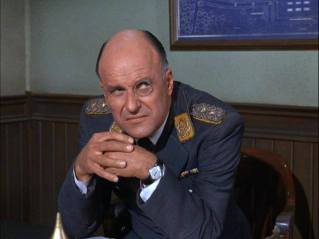 I always figured, if Mr. Drake moved on (as Dick Smiley had, from the junior high, where he’d been principal when Margo and Christy and I were in seventh and eighth grades) and Dick Smiley got promoted, the first thing he’d do (or one of them) is knock out the second floor walls into the lobby and destroy the skylight and the frescoes of learning (did I mention that those frescoes depicted Famous Thinkers Through History, including Newton, Galileo, Einstein, Beethoven, Madame Curie, Edison, Franklin, and– one I didn’t recognize at the time, but spotted when I came back for our reunion– Krishnamurti!), and put in scaffolding or a rope bridge or something to join the two open hallways, so we could, all of us, move efficiently from second floor east to second floor west without a distracting, time-wasting (23 seconds, on average) trip up and down two flights of stairs, through the lobby, where Kids Might Get Into Trouble.

I realize that I keep calling him “Dick Smiley” and not “Mr. Smiley.” We always called him “Dick Smiley,” because (a) it was a funny name that we liked to make fun of (any excuse to say the word “Dick”); and, besides, (b) we didn’t feel like he deserved our respect.

Margo, in particular, hated him. “I think it’s that whole Eichmann thing you said once,” she said one afternoon on the way home from school. “It’s genetic with me. Grandma Trudeau barely got back to Quebec from France during the occupation. All you ever have to do is mention anything about Germany and she’ll launch into a tirade about ‘da Hun.’ Not the Huns… the Hun. Singular… like there’s one Hun someplace, controlling everything. Cripes… the last time she was here I was talkin’ to Mom about what kind of car I’d maybe like when I finally get my license, and how cute Kathy’s VW is, and oops-yyy! ‘Oh, Volkswagens! Da Hunmobile! Car of da tousand year reich! Hitler’s beach buggy!’ Et cetera, et cetera. Two… uninterrupted… minutes, Bri. I shit you not. We just waited till she was done and then Mom said, ‘Well, maybe we can get you dat Dodge Rambler at Harris Chrysler.’ Yeesh!

Well, I was glad Grandma Trudeau would.

Anyway, there he stood, above me, hand on my shoulder– heavy but not gripping… not clamped on like Mr. Drake did. (I never got The Clamp, but Margo did once, “and I almost spun around and slapped him out of instinct. Hand clamped right on my bra strap. You’re a guy, Brian… you don’t know!”) –and as I turned my head to look up at him, I tried not to look or act tense, but I was totally tense, and also further annoyed… like, did I really need this one more thing?

I swallowed and took a breath, and as I did, I wondered if this guy ever got tired of kids swallowing and taking a breath and getting tense around (under) him, or if he somehow liked it? In his eyes I couldn’t read anything; that was the scary part. He was less like a person than he was a vulture, just looking for something to swoop down in on and start picking apart, rending. And there I was, fresh prey: in the lobby, on the bench, outside the girls’ (not boys’) room, disrupting flow and efficiency and logic in my own little annoying way. I started to answer his question (remember his question? About seven paragraphs of asides and exposition back? “Waiting for someone, Mr. Pressley?” One of those stupid, answer’s-in-the-question questions that peppered our school days, like Do you want to share that with the whole class? or Going somewhere?… questions that always made me want to scream What the fuck do YOU think??!!)

(I subbed one day in a high school. That was enough.)

(But again, I digress. Never mind “staying together”; how do novels get written? I started to answer him…)

…but before I could get a word out, he said, “Do you have a hall pass?”

Of course I didn’t. And he knew it too. I was at lunch; why would I need a hall pass?

Well… because if I was “at lunch,” that was in the caf, not outside the caf. Just because I didn’t like him didn’t mean I couldn’t think like him. That was part of the problem.

“Well,” he said, just as I predicted, “then shouldn’t you be in the cafeteria?”

See, this is what I hated about being in school, about being a kid. I knew what the school’s rules were, or at least I think I did– now, was there a specific rule against sitting in the lobby on one of these benches and waiting for someone while they were in the bathroom? Or was that covered under some Students must remain in the cafeteria until the end of the lunch period unless they need to use the rest room or visit the nurse or another office with a hall pass bullshit clause?

Sitting on that bench with him standing above me and Christy in the girls’ room behind me, I didn’t even know.

But there was another rule, definitely unwritten: Christy was upset and had run off. It wasn’t really my fault (not directly), but I felt like she was my responsibility. I loved her, and if I’d just stayed seated in the caf eating my lunch like a good little student while she ran out to the bathroom and cried, how would that look to her when she came out? How would I feel?

Never mind the ancillary argument it would spark:

Why didn’t you come out after me?

Oh, so it’s more important for you to finish your lunch than to see if I’m O.K.?

I couldn’t cite a specific rule for Christy and me, either… but I could feel it. And at that moment, I felt like I knew which set of rules was more important.

I took a breath and looked up at Dick Vulture, and… you know, I don’t know what came over me, but all that annoyance and not liking him and not wanting to be on that bench or in the caf or in the lobby or the building or anyplace just coalesced…

I turned my face front and sighed. “You’re right,” I said. “I should be in the caf.” And I didn’t move or look at him.

Silence as Dick Smiley stood there, processing this, trying to make sense of the contradictory and circular illogic in my words and actions, like he was one of Harry Mudd’s androids (If Brian knows he should be in the cafeteria, then why would he be sitting out here? Therefore, he must not know that he should be in the cafeteria. But he says he knows he should be in there, and yet he is out here; therefore he must not know…) and just as I wondered if I’d start smelling smoke from the overloading circuitry in his neural net, the girls’ room door opened to my right and Christy stepped out, dabbing a tissue to her cheeks. As the door hit her butt, she saw me and Dick Smiley and stopped– “Oh!”– like she was not only surprised to see me sitting there, but, at the same time, since I was sitting there, not surprised to see him standing there. She barely missed a beat. “Thanks for keeping watch, Bri,” she said, a little bit awkwardly, like it was the best thing she could come up with at a moment’s notice, but it was enough: when she reached down and touched my right shoulder, it felt like the same spot where the angel stood in opposition to the devil during their Flea Market Debates, and I stood up without so much as glancing at Dick Smiley, and turned with Christy to walk back into the caf, her hand loosely resting on my right shoulder.

Meeting Dennis Wilson is available in both softcover print and Kindle editions, in either seven serialized installments or as an omnibus edition gathering all seven books.

Click here to order these books in print or kindle edition from Amazon.