Three teaser previews of my first two novels are available as Kindle short stories: My First, My Last, My Only Cigarette, Peaches, and Semi-Sexting. These excerpts are 99 cents each, and free to Kindle Unlimited subscribers. 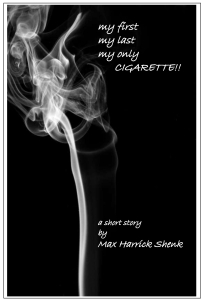 My First, My Last, My Only Cigarette is a chapter from You Don’t Think She Is, an epistolary story (in the form of a letter) from Margo to Brian, about a seventh grade night when Christy and Margo went to a high school basketball playoff game, and…

Christy + me leave the game to go hit the head and I go into my stall + when I look down at the toilet paper thing, low and behold there is a full pack of CIGGARRETTES just sitting there!!! Open + with a couple missing but full mostly. And with matches stuck in the selafane wrapper…

Download My First, My Last, My Only Cigarette here. 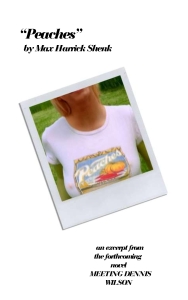 Peaches is an early version of five chapters from Book Five of Meeting Dennis Wilson. It all starts with a t-shirt…

I should note, first of all, that Christy’s school outfit on Thursday that week was actually a layered look: a t-shirt with a sweatshirt over it. The sweatshirt was a red hooded CAPE MAY zipperfront, which Christy wore, zipped up partway, throughout the school day and during band practice.

As for the t-shirt…

…the t-shirt was a tight, cream-colored French tee that Christy’d gotten the previous weekend in Washington, against her mom’s wishes, at a record store where she and Kathy shopped every time they made the trip to see their dad: a supermarket-sized store called Peaches. It was a simple design: the store’s name in script– Peaches— and their logo –a cluster of ripe, juicy peaches riding on an album– emblazoned across the chest.

Peaches. Across the chest of a t-shirt that was, by appearances, a size too small (deliberately) for 34-D Christy.

Just wanted to establish the outfit.

From there, Brian and Christy sneak off to a dark auditorium after an after-school band practice, and one thing (making out in the dark) leads to another (Christy losing her bra) and then another (getting soaked walking home in a cloudburst), right up to Christy’s mom opening the front door and uttering three words: 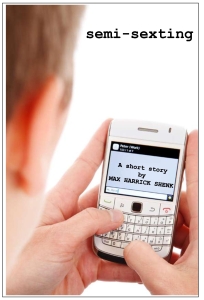 My wife is now a guidance counselor (at the same high school we both attended thirty-some years ago) and this past spring, one of the teachers in her building had repeated “problems” with two girls.

“Every third day, sending them to the office, to the principal, the assistant principal, whichever one of us in the guidance office was free. And for all those times I saw those two –Ashley and Kayla… might as well give their names– for all the times I saw those two sitting there in the reception area looking sheepish, waiting for whomever, I never really was quite sure what exactly they were doing to be a ‘problem.’ You know?…Who knows how they were being ‘disruptive.’ Probably doing the same things we used to do: giggling, making dumb jokes, rolling our eyes, not paying attention, passing notes, not sitting up straight… whatever. But whereever they go, they’re a ‘problem.’ They were the teacher’s problem… he sends them to the office, they become our problem. A discipline problem, a family problem, a personal problem, his problem, our problem… a problem.

“And I just looked at them and thought, ‘You know, enough with the problems!’

“So I took a breath and I said, ‘Girls…’ and they looked at me, you know, like they were expecting someone else, some other adult, to bullshit them. Cringing but at the same time a little defiant. And the way they looked, something about them just reminded me of me and us, and all our friends from high school, but also, one of them is a blonde and one of them is a redhead, so mainly I thought of Christy and Kathy Kelly, and that one spring when Kathy was graduating and all that stuff was going down, and they took off for a long weekend in DC without telling their parents first. Remember?

“Anyway, I saw them sitting there and I just… I blurted out, ‘You guys wanna make a Sheetz run?’

“And they kind of looked at me, blinking, you know, like they didn’t quite think they heard me right.