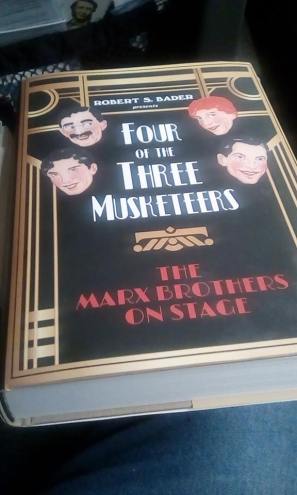 I’m two chapters into Four Of The Three Musketeers, Robert Bader’s densely detailed, fun book about the Marx Brothers’ career onstage, from their formative years up to the end, when they toured stage versions of their films to gauge audience reactions.

It’s fun to read in detail about incidents and people to which the brothers (mainly Groucho) alluded but glossed over in other books, articles and interviews.

For example, chapter two closes with an authoritative account of Groucho’s first paying touring vaudeville job, as one of the performers in the Leroy Trio, led by a cross-dressing singer named Gene Leroy. 14-year-old Groucho was left stranded in Denver, Colorado, when Leroy took off with the act’s earnings. In other accounts I’ve read (most notably in the hilarious oral history The Marx Brothers Scrapbook), Groucho had less-than-complimentary things to say about Leroy (whom he remembered alternately as Leroy, Loring, and Leroux)… perhaps understandably, given the end of the act.

What Groucho didn’t mention either in that book or in other interviews I’ve seen is that several years later, Gene Leroy made headlines in a different way. According to Bader:

On July 23, 1920, an unclaimed steamer trunk was opened at the American Express office in New York’s Grand Central Terminal. In it was the crudely dismembered and disemboweled body of Katherine Leroy Jackson, the common-law wife of Eugene Leroy. The trunk had been shipped from Detroit, Michigan on June 10 to the man identified as the woman’s lover. Leroy had left his Detroit rooming house the day after his wife was last seen, and he in turn was never seen again.

This is a fantastic book which, so far, captures the flavor of the brothers’ formative years as a show biz act. Bader goes into exhaustive detail while presenting often conflicting accounts, usually not only from the brothers themselves, but sometimes from the same brother multiple times. As you might expect, Groucho’s is the dominant, most memorable voice, but all of the siblings get their turn. It’s the perfect combination of fun, funny, and fascinating.

5 thoughts on ““Four of the Three Musketeers””