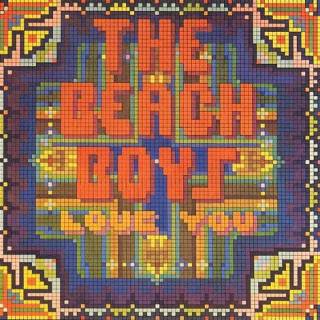 Today, April 12, 2017, is the fortieth anniversary of the release of one of my favorite albums of all time, The Beach Boys Love You.

The Beach Boys Love You might be the strangest album in the Beach Boys’ catalog: a synth-based collection of fifteen Brian Wilson originals, dominated by hoarse vocals and oddball songs about astronomy and Johnny Carson and a guy who has a crush on a girl but treats her like a baby and the first time I heard it I thought WHAT IS THIS SHIT???

And yet now it’s one of my favorite albums of theirs. I consider it not only their last great album, but one of their five best albums of all time, right up there with fan favorites like Summer Days (and Summer Nights!!) and Pet Sounds and Sunflower. (Either Friends or Today round out my top five, depending on what mood I’m in or which one I’ve heard most recently.)

So how did an album that started out as a record I quite frankly HATED become one of my all-time favorite records, not just by the Beach Boys, but by ANYBODY? 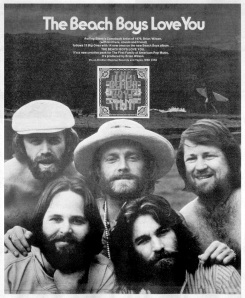 This album taught me so much.

At the time, the Beach Boys were vying with the Beatles for title of “My Favorite Band,” and so I was really looking forward to this album… and shortly after it was released, I bought a copy, took it home, opened it up, played it through, and… I hated it. Hated almost every track. The vocals sounded harsh and coarse; the arrangements were sparse and odd. The songs seemed, on their surface, to be trite. I think I liked ONE track out of the fourteen: “Good Time.” The rest, I really just HATED…

…something told me to play it again, stick with it, give it another listen… and another…

…and slowly, track by track, everything I disliked about this album at first grew on me. Subtly complicated melodies unencumbered by “meaningful” lyrics… rough hewn vocals that fit the feel of the songs… guitars and synthesizers and percussion instruments being used in ways I’d never heard before.

What I learned was: when a favorite artist of yours takes his music in a new direction, TRUST HIM.

It’s still one of my top five Beach Boys albums, and certainly, along with That’s Why God Made The Radio (their 2012 reunion album), the BEST new album that they’ve released in my years as a fan (1976-today).

That starts to explain it, but still…

A few years back, I frequented a Capitol Records-sponsored Beach Boys chat board, on which another member posted the following:

Now most of you guys know that I have had very little good to say about The Beach Boys Love You album in the past. A couple days ago I put the CD in my boombox while preparing dinner, and something incredible and unexpected happened: I loved every minute of it. I was jumping around the kitchen singing along with the likes of “Roller Skating Child” and “Ding Dang” and “Solar System” and “Love is a Woman” like it was the Beatles or something. All of a sudden, all of the great things the Love You aficionados have been saying all along made sense. I was in a euphoric state of shock when it was all over. I need some help to determine exactly what happened to me.

I posted the following response:

I’ve said a few times on other threads: when it came out in spring 1977, I absolutely HATED Love You But I gave it a chance and kept listening, and now it’s one of my five favorite BB albums.

I’d say the question shouldn’t be “why do you now like it” but rather, “why DIDN’T you like it before?”

For me, it was a combination of the following:

* On its surface, it sounded like nothing the group had done before. It was certainly a radical departure from the commercial, accessible Fifteen Big Ones (1976).
* The group’s hoarse vocals and the somewhat thin (in spots) background vocals were jarring to someone who was concurrently discovering the group’s “classic” records, which, vocally, were ANYTHING but “thin” or “weak” or “hoarse.”
* Some of the lyrics made me cringe.
* Like the vocal sound, the synth-based instrumental settings were jarring.

That was what I DIDN’T like about Love You when I first heard it. But I think it’s an amazing record. It takes risks, for one thing (like I said, no BB album before or since was such a radical departure from what came before in so many ways). 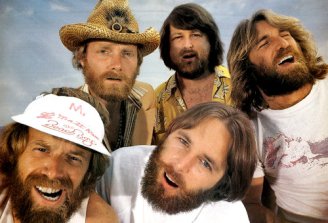 Musically, I think the arrangements are stunning: the voicings and the way the different instrumental voices play off of and almost “talk to” each other (best example: “I’ll Bet He’s Nice”); the drum parts (one of the best examples ever of how Brian couldn’t be satisfied with a drummer who pounded away on two and four, but who played patterns that, again, played off and “talked to” the other percussion and instrumental voices). The use of the group’s individual lead voices (again, exemplified on “I’ll Bet He’s Nice,” where Brian has his brothers trading off the lead vocal part almost line by line). The BACKGROUND vocals, which, am I the only person who has noticed this, was the last time that the group had a new album dominated by their classic background vocal blend of Mike on bass, Carl, Al and Denny in the middle, and Brian high and sweet on top…and speaking of “Brian high and sweet on top,” SCREW that awful, awful, hideous AWFUL TRACK “She’s Got Rhythm” on M.I.U. Album that everyone oohed and ahhhed over (“Brian’s singing high again!” Yeah, but THE SONG SUCKS!!!)…Brian’s falsetto lead passages on “Airplane” are not only among the prettiest singing he ever did; they’re also pretty much the last time that he sang like “the old Brian.”

The sweet dumbness of the lyrics, which, the more I listened, fit the melodies and the tone of the songs and sounded just fine to me if I didn’t THINK about them too much.

And the title. In angry “rock vs. Disco” 1977, when the last best hope for rock and roll seemed to be angry new wave or angrier punk, the title The Beach Boys Love You was a breath of fresh air.

The Beach Boys love ME? Why, thank you! 😛

It’s just a sweet, complex, weird, quirky, beautiful album that works on so many different levels that it’s easy to dismiss it…believe me, because when it came out, I dismissed it. But to me, Love You stands right there with Pet Sounds in terms of multi-leveled sophistication, which is why the more you listen, the better it sounds… there’s a lot there to hear, and the more you listen, the more you notice.

Roy Wood said of his album Boulders (another quirky fave of mine) upon its reissue on CD that “It’s old, but still weird enough to be different.”

That’s a good way to describe The Beach Boys Love You. I recommend BOTH albums.

I said it about Pet Sounds and I’ll say it again about Love You: Thank you, Brian.

And happy birthday. May we all age as well as The Beach Boys Love You!

Read a few more reviews of the album here.