“…but that God of whom I speak is your own wonderful human imagination. Now, tonight, to show you how easy this thing is, it is based purely upon MOTION.

“He dwells in me where? As my own wonderful human imagination.

“Now, I go back to see how he first created. He created by a motion. I move from one state into another state. If it is a state desired, then I have a sense of relief when I get into the state desired. If tonight I was up against it financially, and then, suddenly, I came into a fortune, what would be the outstanding feeling that I would have? Would it not be relief? So I insist: of all the pleasures that man could ever experience in this world, relief is the most keenly felt.

“The child is late. You said, ‘Be home at ten o’clock.’ So ten o’clock, eleven o’clock, twelve o’clock, and there is no child. You think you are in control. You love her dearly and you think you are in control. ‘Oh, yes, I can control my mind, my imagination, it’s easy.’ But then comes one, and there is no child. And inwardly you conjure a thousand-and-one things that could happen. Then you hear the little knock on the door, or the key in the door, and she comes through the door. What is your emotion? One of relief. Just one of relief.

“So of all the pleasures of the world, relief is the most keenly felt. It comes in the creative act. Call it by another name if you will, but it is relief at that moment of explosion.

“Now what do I do after that? Nothing. Remain in the state. It has its own appointed hour; it will ripen, and it will flower. Don’t be concerned; you’re in the state. Now let it unfold itself in its own wonderful, natural way. It has ways and means that no one knows. Its ways are past finding out.

“So I move myself into a state. I don’t remain in the state I want to leave behind me and push a button and think something is going to happen. I move. I move from one state into another state.”

Listen to or download a recording of “Immortal Man” here.

Neville From My Notebook

More Neville From My Notebook 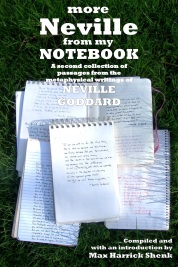 Two collections of quotes, passages and lectures from the mystical teachings of Neville Goddard, available now as e-books.