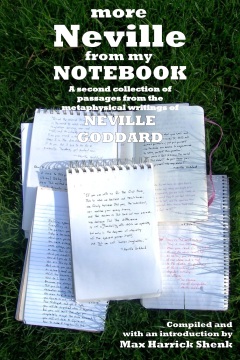 I am publishing a second collection of Neville Goddard quotes and lecture transcripts entitled More Neville From My Notebook. This book features quotes gleaned from Neville’s lectures and books, as well as transcripts of three lectures which (I’m pretty sure) were not transcribed until now.

From the book’s introduction:

I discovered the teachings of mystic Neville Goddard in 2015.

Neville Goddard simplified metaphysical practice into two components: what he called “the law” and “the promise.” The Law is that God, as he said, is “your own wonderful human imagination.” Therefore, all activity and reality is created by what we imagine, what we feel as real. The Promise is the awakening of Christ within man. The two components are intertwined. A person exercises the Law to prove to himself that his imagination is, indeed, God, and through that proof, he awakens Christ within himself and realizes the Promise.

Nearly from the moment I started reading and listening to Neville’s works (mainly through his lectures and through six short books gathered in a collection called The Neville Reader), I copied favorite passages from those works into my journal.

After having done this for a year, I realized that those passages, if assembled chronologically, could at least constitute a neat quotes collection and introduction to his teachings, and maybe even a roadmap (or travelog) of my awakening through those teachings.

I assembled and published that first collection, Neville From My Notebook, in summer 2016, but I didn’t stop copying favorite passages from Neville’s works. In fact, I even took it a step further and transcribed several complete lectures. As far as I know, those lectures have not been transcribed before (if they have, they are not, at this point, anywhere online). Those lectures close this volume.

Less than a year later, I’ve gathered enough material for another book, and that’s what More Neville From My Notebook is.

More Neville From My Notebook is now available for sale and download in PDF and mobi (Kindle) ebook formats for $2.99. Click here to buy it now

20 thoughts on “More Neville From My Notebook”