This might be my favorite show biz story of all time.

It was told by Morrie Ryskind, one of the writers who worked on the Marx Brothers’ stage show of Animal Crackers. Harry Ruby was a songwriter who worked on the book for that play (and movie). This was taken from an interview that originally appeared in the book The Marx Brothers’ Scrapbook by Richard Anobile and Groucho Marx, which, itself, might be my favorite show biz book of all-time. An oral history anchored by interviews with Groucho, the Scrapbook also featured interviews with writers and actors who worked with the team. The book was hugely inspirational to me as a fiction writer, in that it taught me that…

…”the same story” could be told from multiple perspectives; and

…the differences in those retellings could be a tremendous tool in revealing character; and, finally 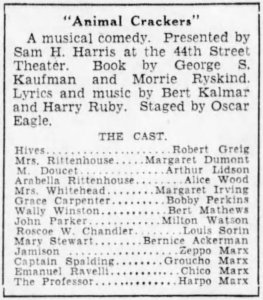 Ryskind discusses the 1928 opening of Animal Crackers off-Broadway, and says…

…We opened the show in Philadelphia and from the very first night we knew it was a hit.

As it happened, during the weeks we played in Philly, Groucho had a birthday. So all the boys got together and we decided to give him a bathrobe for his birthday. Well, there was (George) Kaufman and myself, the three other brothers, Sam Harris, Bert Kalmar and Harry Ruby and we each chipped in ten bucks and got Groucho an eighty dollar bathrobe. And he was very pleased with it.

Finally, as the show ran, the bathrobe got to be sort of a tradition. Whenever someone’s birthday came along the other guys would chip in and get him a bathrobe. I’ll never forget the night I got Harpo his bathrobe. I had gone to Broadway to get his but the only nice one they had was less expensive. So I gave it to him and he wouldn’t take it. He insisted it had to be an $80 robe and he went right out to exchange it. We had to hold up the curtain a half hour while he went out to get an $80 robe!

Anyway, before long, everybody got his robe except for Harry Ruby. He’s a very funny guy. About a week before his birthday we all got engraved announcements that his birthday was such-and-such a day and told us not to forget to chip in and do the right thing.

We had a consultation among the fellows and we thought it might be nice to string Harry along. So on his birthday he comes into the theater, I think it was a Friday night, and everybody says “Hello, Harry!”

And he asked, “Do you know what date this is?”

Finally, Groucho and I went over to have a talk with him and we explained that we were all getting a little tired of the tradition about the bathrobe so we decided to stop it.

Well, Harry decided to search all of the dressing rooms, sure that we had bought it, but we hadn’t. He then figured we’d give it to him at the Saturday matinee or evening performance, but still no bathrobe.

“How can you do a thing like that?” he questioned. Still no bathrobe.

On the following Monday we got an announcement from his attorney that Harry was suing us for the bathrobe, but that didn’t bother us. 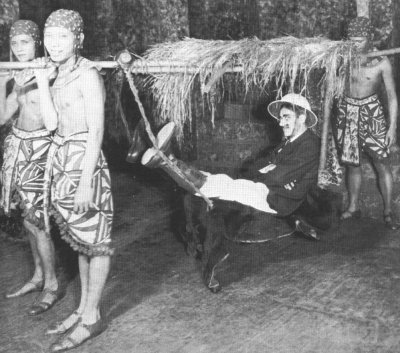 During the performance that same evening something happened. You know, there’s the scene where Captain Spaulding (Groucho) is going to show Maggie Dumont the things he collected in Africa. He instructs that his chest of trophies be brought out and they come onstage in a magnificent trunk.

There before the audience the servants open the trunk and out steps Harry Ruby who asks Groucho “Where the hell is my bathrobe?” and walks off the stage.

He got it shortly afterwards.

Click here to see a Youtube video of the variety show Hollywood Palace from 1965. At the 50-minute mark, Groucho Marx and Margaret Dumont recreate the “Captain Spaulding” scene from Animal Crackers for the last time. The show was taped on February 26, 1965, and Margaret Dumont died on March 6, before the show was aired.