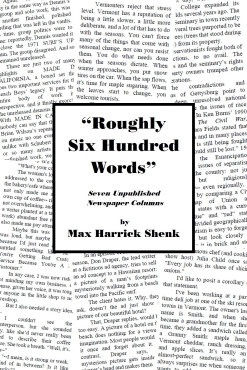 Here’s a sample piece from my new ebook, Roughly Six Hundred Words, which is a collection of seven unpublished newspaper columns from 2013 and which you can get FREE as a PDF between now and October 16. (The collection will be published by Amazon Kindle on the 16th.)

A couple years ago, after reading a book called The Do-It-Yourselfer’s Guide to Self-Syndication, I got the idea that I’d self-syndicate a newspaper column. I’d e-submit a 600-or-so-word general interest column article weekly to a list of newspapers in the US, and, hopefully, get enough bites to sustain me as a writer while I worked on my fiction.

For a lot of different reasons, the idea didn’t work, and after writing and submitting fewer than ten articles to my list, I gave up on it.

But I recently rediscovered the pieces, and thought that they were too good to just gather dust on the cloud (now there’s a figure of speech that would have been meaningless ten years ago!).

I always felt like these pieces deserved readers, and now, with Roughly Six Hundred Words, they get a second chance.

A sample column from the book is below.

If you want to order the PDF ebook from my e-store at Selz.com, click here.

After October 16, “Roughly Six Hundred Words” will be priced at 99 cents, but the first weekend that this PDF ebook is available, I am pricing it as a FREE pay-what-you-want item. If you want to read it free, then just enter $0.00 as the price when you check out. If you want to pay more, it’s up to you.

What does it mean to be “Vermonted”? 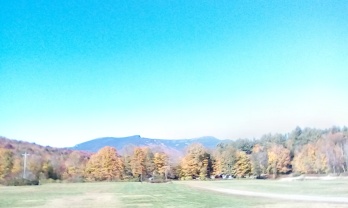 Right now, the trees here are “being Vermonted:” ablaze, as Garrison Keillor once said, with colors so bright that Crayola doesn’t make them for fear kids would color outside the lines.

When I first moved to Vermont, though, I discovered another definition of “being Vermonted.”

A couple years ago, my old Plymouth Reliant needed major repairs to pass inspection. I didn’t know any local mechanics, so I settled on a local Chrysler dealer. A dealer would know the car and get parts quickly and cheaply, right?

I rented a car and drove to Pennsylvania for a week. When I came back to Vermont, my inspection not only wasn’t done; it hadn’t even been started. It was another week of their excuses and my prodding before I had  my car.

When I told a friend about this, she said, “Congratulations! You’ve just been Vermonted.”

I’d never heard the term, but somehow, I knew exactly what she meant.

Vermont is a lot different than Flatland (any state south of Vermont). In Flatland, there’s a level of stress and anxiety that many people accept as a given. To me, the quintessential Flatland attitude was reflected in a road sign I once saw at the entrance to the Washington DC beltway:

BE PREPARED FOR SUDDEN AGGRAVATION!

Vermonters reject that stress level. Vermont has a reputation of being a little slower, a little more deliberate, and a lot of that has to do with the seasons. You can’t force many of the things that come with seasonal change, nor can you resist them. You do what needs done when the seasons dictate. When winter approaches, you put snow tires on the car. When the sap flows, it’s time for maple sugaring. When the leaves start to change, you welcome tourists.

That’s the Vermont attitude. Roll with the changes.

An example: a couple days ago, I took my usual 15-mile commute down an unpaved back road. It’s a lovely drive, but about halfway to work, I got stuck behind a road grader. The dumptruck had dumped loose rock and dirt on the roadbed, and it had to be smoothed down.

On my way to work, with no other route available, I was now driving 15 miles per hour.

Fortunately, from experience, I knew that I need to allot time for these things. In cases where there’s only one way to travel, I figure in a minute per two miles traveled for road work, tieups, accidents, and those times that you get stuck in a line of traffic behind a leafpeeper who needs to drive 32 in a 50 mph zone so they can keep an eye opened for moose.

Having allotted that extra time, I knew I’d make it to work early, and I did.

If I was the kind of Vermonter who “Vermonted,” I wouldn’t have allotted the time, and, when I showed up late for work, blamed the grader for getting in my way, and not myself for planning poorly.

Sometimes being Vermonted manifests itself in other ways. When I lived in Stowe, I had another vehicle that needed an inspection, and a coworker suggested a “mechanic” whose “garage” was on a back road about five miles out of town.

“Düde,” he said, “I took my Wagoneer there. I knew it needed some work to pass. I pulled it into his garage, got out. He walked around it once, got in the front seat, scraped the old sticker off the windshield with a paint scraper, stuck a new one on, and said ‘Thirty-five bucks.’

“I paid him, and as I started the engine, a state cop pulled into his driveway. The mechanic knocked on the window and said, ‘If he asks you any questions, tell him you had it here overnight!’”