“Colloquium” is written in the form of a question-and-answer session in front of a university audience at a lunchtime sociology colloquium (hence the title). For more information on “Colloquium” and to order, click here.

Moderator (Ross) – (Tell us about) the first time you saw your face on a magazine cover.

Rebecca – Yeah. Well, like Ross said… OK. First of all, I think we all know the mindset and attitude that kind of goes along with being up here (Penn State) as a student, right? It’s what my husband calls the Happy Valley syndrome. You know… they say “what happens in Vegas stays in Vegas” but here it’s kind of the opposite of that… that you feel that what happens outside of Happy Valley can’t touch you in here. You know? And I was kind of traveling outside of the gravity of the college to do these shoots and so it always felt like, when I’d get in that car to go do a shoot, that I was kind of driving away from Christy and driving toward Rebecca. So that when I’d get to Gerry’s or down to Harrisburg to do the shoots there–

M – Just to interrupt: Gerry being one of the photographers you worked with.

R – Right. Yeah. Sorry. So anyway, when I’d get away from here, as I was driving I kind of felt Rebecca brain taking over. So that when I got there I’d kind of… I don’t know if “steeled myself” is the right term, but I did feel like I had made a kind of mental shift and sort of psyched myself up for doing this. Right? It’s like I couldn’t have done the shoots in my dorm room (audience laughter) and if college girl Christy had shown up at the shoots, that would have been weird, but Rebecca was totally fine with it.
I have a split personality, don’t I? (audience laughter)
So what was the question again?

M – The first time you saw your face on a magazine cover.

R – OK. Yeah. So there’d always been that very clear division– Christy and Rebecca. Happy Valley and Adult World. You know? And one of the biggest fears I had when I was doing this stuff at first… I mean, I wasn’t just a student here, but I was a student trainer for the football team. And I was horrified that Coach Paterno would find out somehow, or Jesus Mary Joseph, one of the players would see something or hear something and I would… my cover would be blown, I guess. Right? But I kind of told myself that, again, driving away from campus to do the shoots, Rebecca was out there. Christy was in Happy Valley. Right? And I think only… that first magazine was published, the one that I’d done the first shoot for… it was one of those “College Girls” magazines, called “University Girls USA,” and I had one picture in it. So it’s not like I was the cover girl, and it didn’t give my real name. It said “Rebecca Christy.” And when you looked at the picture, it didn’t look a LOT like the way I looked going out around campus. For one thing, I wasn’t naked… (audience laughter) …but also, the whole look, makeup and hair, all that. Anyway. Even when that magazine came out and it was sold in town and on campus at the bookstores, I felt… I may have gotten a feeling a couple times like “That guy recognizes me from the magazine.” But I still felt pretty anonymous and hidden. And like I said, like that was “out there” and here I was, in Happy Valley. Right? And that was really the only magazine that was published while I was a student.
But… OK. So a couple years go by. I had graduated as an undergrad, I was still living in town. I hadn’t done any work, you know, any shoots, in three or four years, and I was a single mom. And I was leaving town with my daughter to go to Bloomsburg to see my big sister, who, ironically, was one of the few people in my circle who knew what I’d been doing, what I was up to. 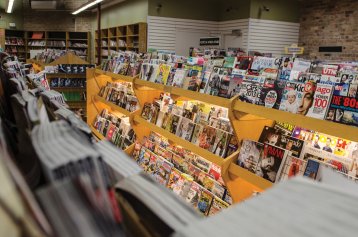 R – Right. We’ll get to that. So I stopped at this 7-11 near the exit on I80, so I still felt like I was kind of here, and I grabbed some coffee, some gum, you know, and there I am, in my sweats, no sunglasses or any disguise or anything, and as I’m standing there at the counter waiting to check out, I happen to glance at the rack of porn behind the counter and right there on the top shelf was the new issue of “Coed” Magazine with my face big right on the cover. And I mean, my body was behind a wrapper and they had a modesty shield over most of the cover, but there was my face, staring right out at me from the porn rack at the 7-11. I think that… if it wasn’t the first time I’d ever gotten a cover, it was at least the first time I’d ever SEEN myself on a cover. And I just… I felt a little weak-kneed at first, and like “Holy… CRAP!” And I felt my face turning bright red, and then looking at the clerk, the guy in line in front of me, the guy in line behind me, thinking not only did they see it too and they had to recognize me, but almost like I was standing there naked in line right there in front of them. You know? And really… it was all I could do to pay for my stuff and get the heck out of there. And the whole way to my sister’s I was, like, “Oh my God. It’s OUT THERE. What am I going to do?” As if it had never really occurred to me that from all those shoots I’d done, one of them might actually get published and printed on the front of a magazine that I might see for sale.

M – Well, and what you did next was the amazing thing.

R – By amazing you mean “ridiculous”?

R – But it was. I mean… I should say. What I did next was… I thought, “OK. I don’t want anyone I know to see this.” And so I got this… big redhead wig… and big Jackie O sunglasses… (audience laughter) …serious… and I took almost my whole next paycheck, because I was working as a grad assistant at the college, and I went around to all these newsstands, convenience stores, in and around State College, and I bought up that issue of “Coed.” Parked the car out front and let it idle with my daughter in the back seat, and I’d go in, scope out their porn… if they had my issue of “Coed,” I’d buy every copy they had. I think I had thirty seven copies of that magazine in the back seat before I finally thought, “OK, this is really… frickin’ stupid. You know? Obviously I’m going to run out of money before I get every magazine. And I can’t take the time and waste the gas doing this. And what happens if child welfare comes by and finds Maura in the back seat of my idling car with a stack of porn next to her?” (audience laughter)
This business is great for worst-case scenario thinking.
Anyway, I gave up after 37 copies. And I took them out to a barbecue grill at Bald Eagle and I stuck them in a grocery bag and torched the whole stack.
And now Marty says, “You know, I’ve seen copies of that issue of ‘Coed’ on eBay for thirty bucks a pop.” (audience laughter) Thanks, honey.
But see, that just goes to show–

R – Yeah, well, I was just going to say, that that just goes to show how insulated I felt up here, and how I felt like that activity couldn’t possibly intrude into my little single mom life in Happy Valley. And when it did, it was a shock. It shouldn’t have been, but it was.
And then the thing that followed was: OK, if it’s out there HERE, then it’s out there where my FAMILY is. So THEY might see it. I think that was what really upset me and also made me realize that it was pretty retarded– sorry… some of us still use that word without thinking… pretty ridiculous to think I could actually safely buy up those magazines so that nobody I knew would see it. I mean, where would it end? You know?
That’s all.

For more information on “Colloquium” and to order, click here.