This excerpt from my novel You Don’t Think She Is (chapter 37) was also published, with some slight modification, as a stand-alone story entitled “Planet Of The Brians,” first in the Vermont newspaper Green Mountain Trading Post, and then in my short story collection What’s With Her? For more info on those books, click the titles… or… scroll down to the bottom of the page.

I got back too late on Saturday to see Margo, and unfortunately, two weeks at church camp did not earn me a free pass, so on Sunday morning at 10 am, there I was, sitting in a pew, dressed in a “light cotton” blazer, white shirt, and clip-on tie (perfect outfit for 90 degree weather), sitting tight between my parents, sweat rolling down between my shoulder blades and from my armpits down the insides of my arms.

“Wish they’d crack open a stained-glass window…” Dad whispered to me midway through the sermon.

Still, for as hot and as humid as it was, I didn’t take a shower when I got home. I’d already taken one before church. From this point on, the day was about doing something that would make me need another one… even though, judging from Margo’s note, we were probably going to do Something Cool.

When I went over to meet Margo after Sunday lunch so we could go to the movie, she looked a little different to me. Not a lot different; just a little… nothing I could really put a finger on… maybe it was just the tan. In the summer, Margo’s skin got dark tanned and her hair light, almost platinum like Christy’s. Plus a detail I suddenly remembered when she opened her back door: “Up at the lake,” she told me a few summers before, “we skinnydip! So no tanlines!”

Skinnydipping… didn’t really want to think about that… so of course when I saw how dark her skin was, what was the first thing I thought of?

(Did they even have topless native girls in Canada?)

Margo brushed her hair out of her face. “Hey, Bri… wait… wait just a sec,” and she ducked back inside. “Dad?” she yelled. “My allowance…” and a few seconds later she was coming back out the door, five dollars in her tanned hand. “Late again,” she said. “I’m supposed to get it on Saturday after Mom and me clean. He always makes me ask for it.” And she zipped open her purse (!) and then caught my eye. “What?” she tittered.

I felt like Margo could see herself and the bevy of Topless Native Girls frolicking on my mental movie screen… but, fortunately, I had an out:

“When did you start carrying a purse?” I said.

Margo stuffed her money down into the neat red leather pouch. “Since Grandma got it for me in Kingston. Tres chic, huh?” and she pulled out a pack of Juicy Fruit. “Gum?” I took a stick and she unwrapped one for herself, and we walked downtown to the theater for the matinee.

I told Margo about Jean (“So you asked her to dance? Yay! Good work, Bri!”) and Ginny (“Awwww… she wanted you to ask her. Well, what can you do about that?”) and she told me about Canada (“No skinny dippin’ anymore. Aside from Jompaw, there is now a family from New York in the cottage next door. Who stare like Steve Kelly.”), and by 1:45 we were buying our tickets, the only two people in line. “Don’t people know this might be the last one?” I said as I held the door open for Margo.

As soon as we stepped inside, I knew we’d made the right choice. After the moist church service, and the sticky walk downtown, the dark, air-conditioned theater felt like a walk-in freezer… better than the pool. We followed my Seat Selection Formula (middle of the theater, width of the screen back) and we picked our seats, but as Margo reached for her purse so she could give me money toward popcorn (I always bought the tickets; she always bought the snacks), she got a sick look on her face.

“What’s that smell?” She screwed her nose up funny as she checked the air.

Margo zipped open her purse. “Come on… you smell it. You don’t smell that?” I shook my head no. “It’s gamey… like a zoo.” She handed me two dollars. “What, do they pump monkey odor into the theater to make the movie more real?” Margo always called the apes in the Planet of the Apes movies “monkeys.”

I took her money. “I don’t smell anything,” I said.

“Well, you must be… smell-blind,” she said as she zipped her purse shut, and then she slouched down in her seat, knees up on the seatback in front of her.

“Can’t believe you don’t smell that,” she said as the lights went down and the movie started, but all I could smell was the sweet buttered popcorn in my lap.

As the previews rolled, I could hear Margo munching away next to me, and just as I was about to say “Jeez, it sounds like a zoo,” she leaned over, right up against me, and sniffed.

“Ewwww…” she said as she sat back.

“It’s you.” She shrunk back into the far corner of her seat.

“I mean‑‑” and Margo pinched her nostrils shut with her fingers and sang “BEEEEEEEEE-OHHHHHHHHH!”

“Brian, I’m serious… you smell!” She shriveled back into her corner. “Battle… for the Planet… of the Brians!”

The movie started, and as I leaned forward to pick my coke off the floor, I caught a whiff of something that smelled like someone had peed into a cup of chicken broth.

Margo, God bless her, didn’t say another word about it the whole rest of the movie. I was braced for insults, questions, wisecracks ‑‑maybe even a lecture‑‑ but she was silent all the way through the closing credits, right up until we started out of the theater.

“No, Bri,” she said as we started walking into the breeze. “Me in front.”

We walked up Dartmouth Street toward home, but she detoured across the street to Holbert’s Apothecary. “Wait here,” she said as she opened the front door, and I sat on the stoop in the heat, sweat dripping down my face, my back… every part of me sticky and damp.

O.K…. so maybe I shouldn’t have skipped the shower.

Less than two minutes later, Margo came back out, a small brown paper bag in her hand. “Did you even take a shower today?” she said as she removed a wax pack of baseball cards and some Juicy Fruit from the bag.

“I thought we were gonna go swim…”

I was kind of afraid to open the bag. What if it was Snakes In A Can (“BOY-YOY-YOY-YOY-YOING!”)? 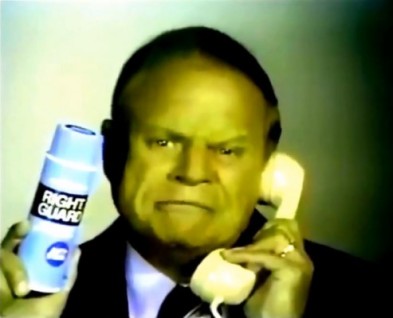 Nope… no springloaded snakes… just a wax pack of baseball cards… and… an opened-front cardboard package with a bottle in it.

I looked up at Margo. “You really think I need this?”

Margo tsked. “Brian, seriously… you smell like… chicken soup that somebody peed in.”

“‑‑Brian!” Margo put her hand on my wrist and looked me in the eye, and I noticed she was wearing eye shadow: lightly applied turquoise powder that flashed when she blinked. 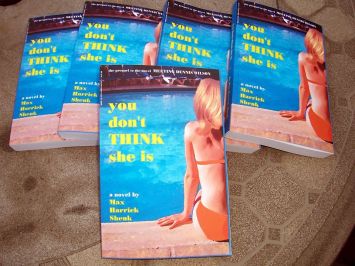 You Don’t Think She Is by Max Harrick Shenk…

“…You Don’t Think She Is by Max Harrick Shenk reveals a brilliantly composed coming of age novel… The short chapters speak volumes about the notion of first love, the workings of puberty, and the understanding of a blossoming sexuality …(and) give the reader a keen insight into each of the character’s youthful thoughts and ideas… Shenk’s book will take any reader back in time to their emotions and explorations during middle school. It is reminder of the innocence of youth and the burgeoning feelings of desire.  –Kathy Buckert, author and English instructor

Available in print and e-book editions.
Click here to order.